skip to main | skip to sidebar

The Black beauty will be a 1:18th die-cast

Its official!
Its official! A 1:18 diecast is on the way to becoming a reality! The car was measured and photographed today and the first prototype will be out in about 9 months. It will be reviewed for accuracy and then all problems will be corrected and retooled. Auto Art is the company and they have a reputation of putting out very accurate pieces. There is no price point yet so no need to ask. There will most likely be limited edition versions and possibly signed ones.

The Black Beauty will appear at the Flag City Ballon Festive in Findlay Ohio http://flagcityballoonfest.com/index.htm
Posted by V194 at 8:49:00 AM No comments: 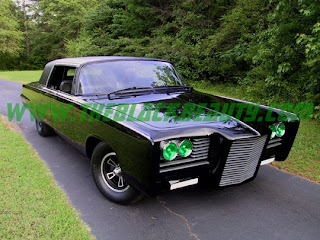 Its been awhile.
The car has appeared in Minnesota, Pennsylvania and select shows in South Carolina and more are being booked as we speak. I am working out the details for an appearance with the cars creator, Dean Jeffires at this coming March's Amelia Island Concours D'Elegance 2011. More than likely the special introduction of the car will be Friday March 11 at 4PM at the Ritz Carlton ballroom. Mr. Jeffries has not seen the car in over 40 years!
As the Black Beauty from the new feature film is making its show rounds I, out of respect for their promotion, will lay low with the TV Black Beauty so as to not add any confusion.
2011 promises to be a big year with a lot of special projects in the works including the long awaited 1:18 scale die cast.

Almost there!
Today the rear phone was installed. The one that is often seen just behind Britt Reids head in the Black Beauty. The front seat was adjusted a bit to match the passenger seat and the rear tailight lens were fitted and new bulbs installed.
Next it to finalize fitment of the front gas gun door and check that function then fitting in the trunk trim and a good wash and detail and then install the fender trim and it is ready to roll.
Starting to get quite a few inquiries about showing the car at special events. I have confirmed a few but not made them public yet. Even some TV inquires asking about the car. So we will see what becomes of it int he near future.
Posted by V194 at 7:22:00 PM No comments:

Almost complete!
The car now has a full interior including seats. The vinyl top has been installed. A big thanks to Vic Calvert for all of his hard work and advice through this process. The top was different than the original install of BB1 as a side note. BB2 and BB1 are different in several different ways. The exterior differences are subtle but in 1966 no one would really notice.
Wheels are finished as well as scoring new tires. The might go on this week. But first the brakes will be thoroughly gone over. New bearings, seals and pads are a must. The front gas gun door has been giving me problems along with its electrical motor. I have been getting electrical advice from Adam Savage of TV's Mythbusters. Thanks Adam for all of your help! Next up will be making the rear taillight lenses which I am not looking forward to as it requires a lot of installing and test fitting.
Posted by V194 at 10:12:00 PM No comments:

Well things are finally progressing. This week I have been installing the front grill, the side grills and the Vinyl top the front seats and all of the interior trim. Great care was taken in aligining the windows for a perfect fit. Wheels are out getting polished and painted. Carpet was also precision fit this was difficult as there is no real good Imperial carpet sets commercially available.
The new website has launched take a look at www.theblackbeauty.com
If all goes well the car should be finished in a couple of weeks.
Posted by V194 at 7:49:00 PM No comments:

The electrical is now finished for the car and there is over 200 hours in that aspect alone. The cars finish has now been completely redone to correct some errors and to maximize the straightness and shine of the car. This is probably close to another 150 hours to do this. I have two guys working on this stage and we may bring in a third who specializes in show car detailing and finishing. I am shooting for a February reveal on the car but it might be close. Then back to my shop for more work. Wheew.....
Posted by V194 at 1:28:00 PM No comments: